Arroyo: A Novel by Chip Jacobs 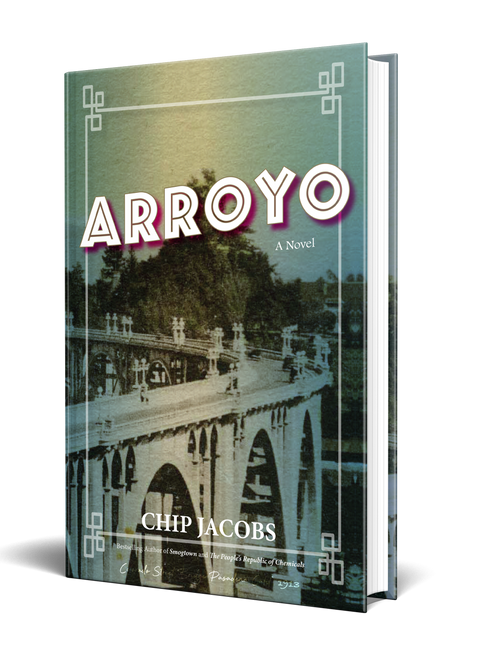 Arroyo: A Novel by Chip Jacobs

Set against two distinct epochs in the history of Pasadena, California, Arroyo tells the parallel stories of a young inventor and his clairvoyant dog in 1913 and 1993. In both lives, they are drawn to the landmark Colorado Street Bridge, or "Suicide Bridge," as the locals call it, which suffered a lethal collapse during construction but still opened to fanfare in the early twentieth century automobile age. When the refurbished structure commemorates its 80th birthday, one of the planet's best known small towns is virtually unrecognizable from its romanticized, and somewhat invented, past.

Wrought with warmth and wit, Jacobs' debut novel digs into Pasadena's most mysterious structure and the city itself. In their exploits around what was then America's highest, longest roadway, Nick Chance and his impish mutt interact with some of the big personalities from the Progressive Age, including Teddy Roosevelt, Upton Sinclair, Charles Fletcher Lummis, and Lilly and Adolphus Busch, whose gardens were once tabbed the "eighth wonder of the world." They cavort and often sow chaos at Cawston Ostrich Farm, the Mount Lowe Railway, the Hotel Green and even the Doo Dah Parade. But it's the secrets and turmoil around the concrete arches over the Arroyo Seco, and what it means for Nick's destiny, that propels this story of fable versus fact.

While unearthing the truth about the Colorado Street Bridge, in all its eye-catching grandeur and unavoidable darkness, the characters of Arroyo paint a vivid picture of how the home of the Rose Bowl got its dramatic start.

Chip Jacobs is an award-winning author and journalist. His books include the biography Strange As It Seems: the Impossible Life of Gordon Zahler; the environmental social histories The People's Republic of Chemicals and the international bestselling Smogtown: The Lung-Burning History of Pollution in Los Angeles; the dark-humor true crime caper The Ascension of Jerry; and the stories collection The Vicodin Thieves. He has also has contributed pieces to anthologies, most recently for Los Angeles in the 1970s: Weird Scenes Inside the Goldmine about the attack on an idealist lawyer by a depraved cult. His reporting has appeared in the Los Angeles Times, L.A. Daily News, CNN, The New York Times, Bloomberg, and LA Weekly, among others.

“Jacobs' thoroughly researched debut novel excavates the buried history of Pasadena—a riveting and enjoyable look at how local myths are constructed, and a vivid depiction of a time and a place that felt full of possibilities”—Booklist

“A completely original and genre-defying work—both historical novel and metaphysical noir… The author has caught the brass ring and given it to us as pure gold…the ending that pulls together all the elements of this ambitious novel is a satisfying tour de force" —Tristine Rainer, author Apprenticed to Venus, My Years with Anaïs Nin

“Chip Jacobs combines the historical deep-dives of Erik Larson and Caleb Carr with the sweep and grandeur of E. L. Doctorow's best work, albeit with a sense of…whimsy…the result is sublime." —David Kukoff, editor of the bestsellingLos Angeles in the 1970s: Weird Scenes Inside the Goldmine

“[An] amazing history…Jacobs is one of the best wordsmiths I know…guaranteed to bring you a lot of laughs, a few tears and a very real knowledge of Old Pasadena… A delightful read, highly recommended” —Steve Hodel, bestselling author of Black Dahlia Avenger.

A CrimeReads 2019 most anticipated/best book

"(A) remarkably entertaining and informative chronicle of the birth and—so far—inexorable evolution of smog... This book is just amazing, a gripping story well told"
—Booklist (starred review and one of the top environmental books of the year)

"Style delivers substance in true Hollywood fashion, with character-driven plots draped in glamour and sensation... the history of smog has never been so sexy"
—Los Angeles Times

The People's Republic of Chemicals

"(The authors) do an outstanding job of showing the causes and effects of the interdependency between American consumers and Chinese manufacturers. The result is a well-rounded portrait"
—Foreword  (five-star review and among best climate change solution books)

"The Smogtown authors return with a look at China's air pollution problem, and it is a doozy... The prose is sharp, vivid, and direct, leading readers through hard-hitting chapters.. a surprisingly enjoyable read."
—Booklist (starred review and one of the top sustainability books of the year)

Strange As It Seems

"Jacobs...is an exceptional storyteller, and his lively look at the extraordinary career of Gordon Zahler...is a peculiar page-turner. Zahler...achieved success on the margins of show business despite a spinal injury...Jacobs...craft(s) an imaginative biography about this unusual figure, who carved out a distinct place in post-WWII Hollywood —Publisher's Weekly

"This amazing book is all heart...Chip Jacobs blends the skills of an investigative journalist, the glitz of Hollywood, and the smooth storytelling of fiction to weave a profile of his larger-than-life uncle that will leave you crying, laughing and gasping in wonder, often on the same page. Bravo!"
—Denise Hamilton, bestselling author of The Jasmine Trade

The Ascension of Jerry

"This is not just another Hollywood Whodunit. In the end we find it is really about one man's search and struggle to find his own personal truths and redemption. Well written and highly recommended"
—Steve Hodel, bestselling author of Black Dahlia Avenger

The Darkest Glare: A True Story of Murder, Blackmail, and Real Estate Greed in 1979 Los Angeles [Signed] by Chip Jacobs

The People's Republic of Chemicals [Signed] by Chip Jacobs