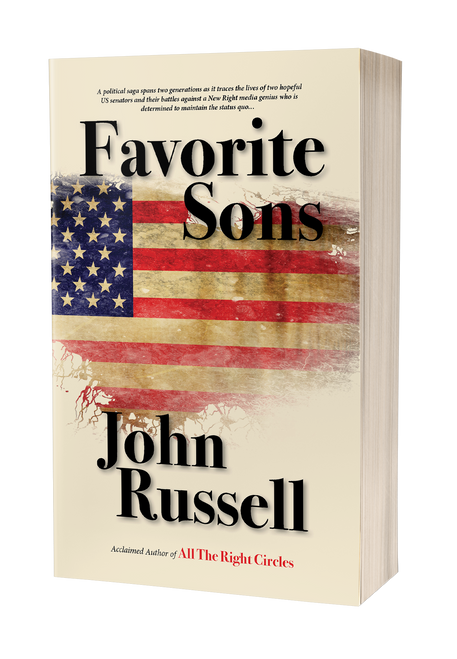 Winner of the Sir Walter Raleigh Award for Fiction

A political saga spans two generations as it traces the lives of two hopeful U.S. senators and their battles against a New Right media genius who is determined to maintain the status quo.

“A splendidly ambitious and well thought-out novel…richly evocative of Southern life in the all-transforming period from the thirties to the present.”
—Alfred Kazin, author of An American Procession

“This novel’s finest accomplishment…appears in the stranglehold that the past exerts upon the present.”
—Los Angeles Times

“Like all good fiction, Favorite Sons illuminates the human condition. It also illuminates our time and place, and tells us something about who we are, and why.”
—Charlotte Observer

John Russell was born in Greensboro, North Carolina in 1954, just days before Hurricane Hazel hit town, and weeks after the Supreme Court’s decision in Brown vs. the Board of Education began to change the local rules. After graduating from the University of North Carolina, he moved to New York and went to graduate school at Columbia, then worked in the publishing industry where he edited manuscripts by writers as varied as Pat Conroy and Virgil Thomson. He went to law school at Harvard, and returned to North Carolina to work in the life sciences field. In 1992 he published a political novel, Favorite Sons, which won the Sir Walter Raleigh Award for Fiction. His latest novel, All The Right Circles, has been hailed by Lee Smith as “... a latter-day All The King’s Men—a smart, provocative, and engaging read.”