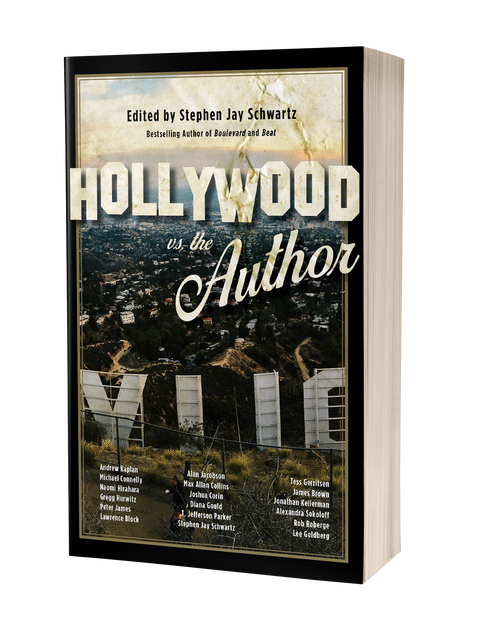 Surviving in Hollywood Bundle includes Hollywood vs. the Author featuring Andrew Kaplan and Michael Connelly, Cry Wilderness by Frank Capra, The Performance of Heartbreak by Scott Caan, Strange As It Seems by Chip Jacobs, and Hollywood's Team by Jim Hock

Hollywood vs. The Author is a collection of non-fiction anecdotes by authors who’ve had the pleasure of experiencing the development room firsthand—some who have successfully managed to straddle the two worlds, seeing their works morph into the kinds of feature films and TV shows that make them proud, and others who stepped blindsided into that room after selling their first or second novels. All the stories in this collection illustrate the great divide between the world of literature and the big or small screen. They underscore the insanity of every crazy thing you’ve ever heard about Hollywood. For insiders and outsiders alike, Hollywood Versus The Author delivers the goods.

"If you, too, feel like wandering, come along and help me unravel this odd tale - a tale full of half-truths, whole-truths, and no-truths at all." So begins Frank Capra's never published, and often speculated about novel of his favorite place - Silver Lake, nestled in the jagged cliffs of the eastern Sierra Nevadas. Capra casts the fictional Frank Capra in the lead roll of this novel of environmental and humanitarian preservation.

As tourism comes back to the decimated boom towns of the eastern Sierras, Frank Capra finds himself, along with a do-good cop named Lefty, at the center of a scandal. That scandal being that they provided food and protection to two men living off the grid in the wilderness, while the powers that be have been desperately trying to clear the men out of the area, being not the kind of folk they want in their towns.

In a story that only Frank Capra can tell, the David and Goliath of small-town tourism politics comes to a head in the wilderness of the Sierra Nevadas. Cry Wilderness is a deeply humane novel about the ways in which people caring for one another ultimately triumphs over oppression.

The Performance of Heartbreak is a collection of eleven one- and two-act plays. With hints of Samuel Beckett, Sam Shepard, Neil LaBute, and Tracy Letts, Scott Caan grapples with the emotional interiors of people in a fractured world. Whether writing about actors, lovers, or co-workers, Caan takes on the complicated tension between what we say and what we feel, how we grapple with the world publicly and privately, and what that difference says about us as people.

Caan's training as an actor imbues his words with a sense of play and the characters he leaves other actors to create within these plays are deep and open to interpretation. The Performance of Heartbreak and Other Plays is the introduction of an exciting new voice in American theater.

Strange As It Seems: The Impossible Life of Gordon Zahler, the journey of a former nobody who defied the odds and biases racked upagainst him to frolic in Hollywood, is vividly retold by his nephew, writer Chip Jacobs.  More than just a biography, Jacobs' portrait evokes an early, Day of the Locust Hollywood where art and fortunes were made by a colorful set of foreigners, weirdos, obsessives, and freaks. During the 1950s and 1960s, Gordon became a kingpin in this milieu, as his music/sound effects post-production house scored films for low budget sci-fi films, genre movies like Sam Fuller's Shock Corridor, Popeye and Bozo the Clown cartoons, as well as hundreds of other projects. Gordon, best known for his clever soundtrack on Ed Wood Jr.'s infamous Plan 9 From Outer Space, was always a better story than the scripts he accentuated.

Hollywood’s Team follows the Rams of the 1950s. They were glamorous, glitzy, and most of all, they were exciting. Like the city itself, the Rams were comprised of both big stars and everyday workhorses like John Hock, father of the author―a quiet, humble, and stout offensive guard.

They were the first major professional sports team west of the Mississippi River, the first to integrate, even before Jackie Robinson, the first team to reach a million fans, and the first team with a TV contract. The Rams of the 1950s were, in so many ways, the first modern sports franchise.