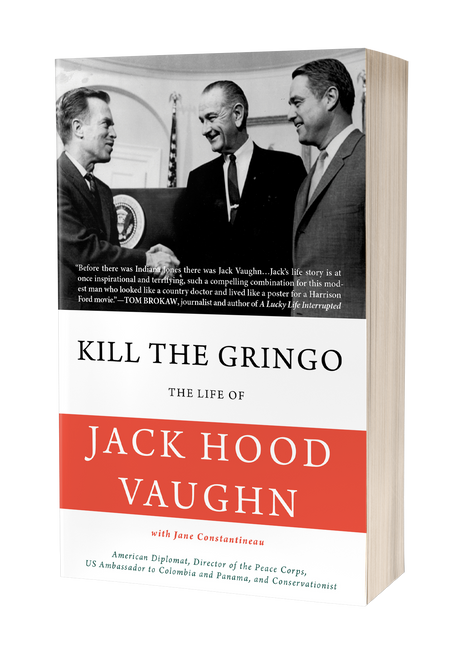 Finalist for the Foreword INDIES Award for Best Autobiography or Memoir

Kill the Gringo is the wide-ranging, action-packed memoir of Jack Hood Vaughn, whose career in diplomacy, social advocacy and conservation spanned more than 25 jobs and 11 countries. A professional boxer during his college years, Jack joined the Marines in 1941, fighting in the battles of Guam and Okinawa during World War II. His rapport with people and facility with language led to a speedy rise in international development in Latin America and Africa where he drew the attention of Vice President Lyndon Johnson during his visit to Senegal in 1961. Three years later, President Johnson appointed Jack ambassador to Panama when violent anti-American riots there led to a severing of diplomatic ties. As the second director of the Peace Corps, Jack presided over the largest number of volunteers in the organization's history and the delicate handling of anti-Vietnam fervor among its ranks. After his foreign service career, Jack led the National Urban Coalition and Planned Parenthood during the turbulent late 60`s and early 70`s. A rural development job in Iran ended dramatically with the 1978 revolution, and Jack turned his focus to the environment, advising the Nature Conservancy and founding Conservation International in 1987. Told with Jack's; humor and humility, his stories reveal an astonishingly varied, lively and distinguished career that lasted 50 years and earned him the nickname Peasant Ambassador.