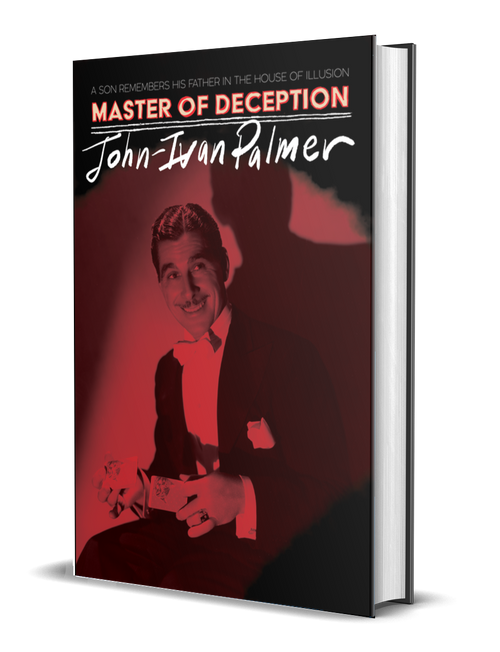 The Master of Deception tells of a son’s search for his father amid the fabric of family, guilt, renunciation, and hidden history in the borderlands of 1950s stage show and trailer park culture.

In the tradition of Geoffrey Wolf’s The Duke of Deception and Jeanette Walls’ The Glass Castle, John-Ivan Palmer’s The Master of Deception takes readers on the road with his magician father and his mother, the lovely assistant, as they travel from Elks Lodges to County Fairs, performing alongside contortionists, ventriloquists, and every manner of screwball act that passed for variety entertainment before television drove us all indoors and away from one another. From dressing rooms across America, John learned to stay invisible among other acts while his parents performed, making friends with janitors, night watchmen, elevator operators, and cooks who gave him leftover tortes and parfaits. They were as exotic to him as the Master of Deception was to them. When they were in one place long enough for John to attend to school he was instructed to follow the other kids and just sit down at a desk. Before they knew who John was, his family would be gone. But even at home (in their trailer), his father remained aloof and unknowable. "Growing up confined to the back seat had allowed me to study every wave of my father’s hair, the arch of his ears, the stubble on his jaw, but nothing of what was beneath. It was only after he vanished from worldly existence that it occurred to me that whatever was beneath might be something I could know. And I would soon learn there was a reason for his silence, which in turn became a reason for mine as an invisible dressing room kid."

Palmer’s depiction of his upbringing is a brilliant and atmospheric evocation of a disappeared America paired with the emotional gravity of a son’s search for who is father really is. At the center of it is the story of his unusual family, who were themselves part of a much larger and more unusual community of variety performers, most of them more at home among each other than the non-performing world. The questions of Palmer’s young life defined the path of his adult life, and, as he proceeded to find his own way in this world, he began to find unexpected answers about his father’s and what made him who he was.