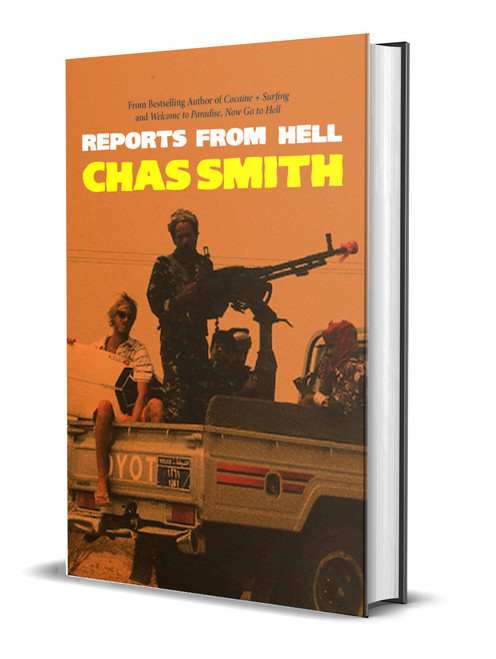 A gonzo ride through the Middle East as only Chas Smith, the award-winning author of Welcome to Paradise, Now Go to Hell and Cocaine + Surfing: A Sordid History of Surfing’s Greatest Love Affair, could provide. Follow Smith and his misfit band of merrymakers as they search for the true origins of Al Qaeda and endeavor to ride the unsurfed waves of Yemen all while exploring the slim opportunities for fun in the margins of our global war on terror and at what cost―even if it means eventual kidnapping by Hezbollah.

"Cocaine + Surfing is a dazzling page-turner, highly-recommended beach reading, and absolutely the funniest book ever written about surfing."
―Outside

"Between untold stories of extravagant parties, untimely overdoses and dark cover-ups, the book doesn’t miss a beat, nor a good time."
―Urban Daddy

Praise for Welcome to Paradise, Now Go To Hell

"Told in an energetic, first-person style that one of Smith’s magazine editors dubbed “trash prose,” the book is a sure-fire hit with fans of surfing literature."
―Booklist

“Chas Smith is a stone-cold original-a globe-trotting, war-reporting, motorcycle-driving, cigarette-smoking, tube-riding, fashion-obsessed international dandy with a penchant for dangerous people, places, and, most of all, prose. Welcome To Paradise, Now Go To Hell is absolutely the most entertaining surf book in years, a breathless adrenalized romp.”
―Daniel Duane, author of Caught Inside, A Surfer's Year on the California Coast

"A vivid and somewhat disconcerting depiction of the world of surfing and its attendant problems . . . An uncommon read for those interested in surfing or those seeking a look at Hawaii from a vantage point not normally found in history books."
―Library Journal

"A hip exposé of Hawaii’s North Shore surfing culture . . . entertains, while superior reporting informs and illuminates much about the surf industry’s peculiar machinations, its cavalcade of sun-bleached heroes and the troubled history of Hawaii itself . . . effortlessly shifting from the profound to the profane."
―Kirkus Reviews

"A mix of reportage and gonzo journalism…. [with] trenchant…astute observations…. If Hunter S. Thompson circa Hell’s Angels merged with a fashion critic to write about surfing for Maxim, the result might be similar."
―Publishers Weekly

"A book of real literary style and grace . . . gleefully mischievous . . . handles like a ‘54 Porsche: smooth, glamorous, and totally out of control."
―Flaunt

"Made me think hard about the North Shore . . . To the best of my knowledge, nothing like it exists.”
―The Inertia

"Smith doesn’t simply stand in judgment. He loves the world of the North Shore, and he hates it. With gleeful defiance and feral wit, he harnesses his ambivalence to fuel this compulsive, wild ride of a book."
―Sydney Morning Herald, Pick of the Week

"A wild and unflinching look at the adrenalin-soaked world of surfing."
―Melbourne Herald Sun

Chas Smith the author of Welcome to Paradise, Now Go to Hell (It Books, November 2013), which was optioned for television by Fox 21 (Homeland and Sons of Anarchy) with producers at Television 360 (Game of Thrones) and a finalist for the PEN Center USA Award for Nonfiction.

Chas began his writing career as a foreign correspondent, penning pieces for Vice, Paper, and Blackbook, amongst others, from Yemen, Lebanon, Syria, Somalia, Azerbaijan and Colombia which led to a brief career as a war correspondent for Current TV.

After being kidnapped by Hezbollah during the 2006 Israel-Lebanon war he transitioned to surf journalism where he was a featured writer at the brash Stab before becoming Editor at Large at Surfing Magazine. There he developed a reputation as the most controversial voices in the space. Matt Warshaw, author of the Encyclopedia of Surfing, calls him, “Bright and hyper-ironic.” William Finnegan, Pulitzer Prize-winning author of Barbarian Days, says that Chas, “…calls it like he sees it and in surfing that’s not usually the case.”

Chas Smith is the co-owner of a surf website, BeachGrit.
×

Surviving Agent Orange: And Other Things I Learned From Being Thrown Under the Partridge Family Bus [Signed] by Gretchen Bonaduce