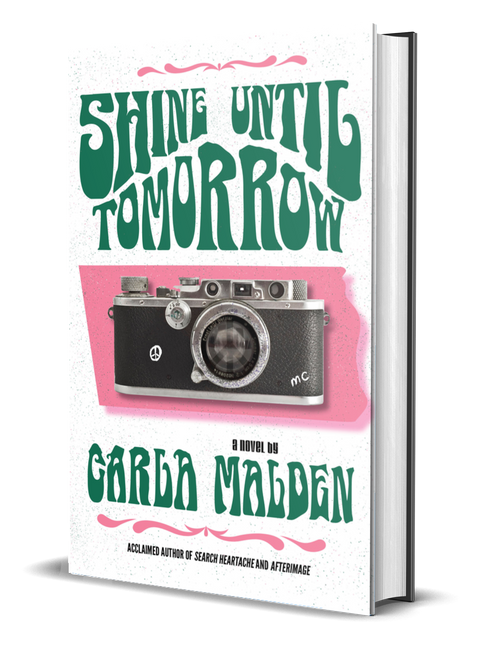 Social misfit Mari Caldwell desperately wants to get on with her life. If only she could get there faster―specifically to Yale―and leave behind all the things that make her anxious: driving a car, crossing bridges, her peers, her parents’ divorce. Mari only feels at ease behind the lens of her vintage Leica. Her camera keeps the world―and the people in it―at a safe distance.

When Mari comes across an old scrapbook of her mother’s, she discovers her white collar parents were once blue denim hippies. She ends up fighting with her mother and storming out. She pedals her bicycle into a downpour, swerves to avoid an oncoming jeep, and flies smack into a tree. Mari climbs into an abandoned VW van bearing the ghost of a psychedelic paint job, and passes out.

The next morning, Mari wakes up to the sound of music. A young couple wander through the glen like hippie gypsies, playing recorder and tambourine. Mari accepts their offer of a ride into San Francisco. But something is wrong; Mari can’t quite figure out what. The skyline, her father’s address, the music on the radio. Everything is slightly off. Except Jimmy, the driver of the van. There’s something about him that calms her inner chatter. Only after she says good-bye to the merry band and runs headlong into a war protest does Mari being to realize: it is June, 1967.

In the epicenter of the Summer of Love, Mari makes friends with the would-be rock band, meets the grandfather she never knew, and falls in love. In spite of herself, Mari discovers that love changes everything. It even changes her.

A fun and touching novel about the people who raise us, the times that define us, and the stumbling blocks on our way to being a grown-up, Shine Until Tomorrow tells the story of a girl obsessed with the future who must visit the past to learn to live in the present.

"Carla Malden’s touching time-travel novel Shine Until Tomorrow gives the space-time continuum a great run for its money. But that’s nothing compared to her inspired treatment of the snarky, heartbreaking, hilarious vulnerability of adolescence as experienced by her unforgettable (and unforgetting) narrator, Mari. What Malden knows about family, memory, and love is what readers across generations will be grateful to remember. I don’t know why, but this lovely book made me go check that my suede fringe ’60s jacket was still safe in the back closet. It was, and it still fit. As does every single sentence of this continually surprising, charming tale."
―Joseph Di Prisco, author of The Good Family Fitzgerald

Praise for Carla Malden
“I've spent my professional life telling stories. AfterImage does exactly that and touches us where we live. It is compelling, moving, raw―with moments of surprising humor. I try to leave my audiences with meaningful and enduring images from my movies. That's exactly what Carla Malden achieves with her newest book.”
―Michael Douglas, actor The Kominsky Method and Romancing the Stone

“Carla Malden traces the awful journey of her young husband’s illness and death with such precision and care, expressing the emotion between the exhilaration of hope and the darkness of reality so powerfully, that her eloquence turns grief into poetry and enlightenment.”
―Blythe Danner, actress Will & Grace and Meet the Parents

“Carla Malden’s memoir about her husband and screenwriting partner Laurence Starkman is a haunting story of love and loss, and a demonstration of the courage required to put a broken life together again.”
―Susan Cooper, author of The Dark is Rising

“All I can say is WOW! I read for a living [and] never has one made me cry until I read this manuscript. Although this is a book that will tug at your heart, it is like the tug on a fishing line when you know you’ve got a big one. I can’t wait to share it with others. This is more than a book, it’s a blessing for anyone who reads it.”
―Barry Kibrick, producer and host, Between the Lines

"Emotionally raw from start to finish, the story . . . also celebrates a rare and profound love that transcended death. A brutally candid memoir of the ‘all-consuming and profoundly uncomplicated’ power of grief."
―Kirkus Reviews

Raised in Los Angeles, Carla Malden began her career working in motion picture production and development before becoming a screenwriter. Along with her father, Academy Award winning actor Karl Malden, she co-authored his critically acclaimed memoir When Do I Start?

More recently, Malden published Afterimage: A Brokenhearted Memoir of A Charmed Life, her own fiercely personal account of battling the before and surviving the after of losing her first husband to cancer. Afterimage is a journey through grief to gratitude that alerts an entire generation: this is not your mother’s widowhood.

Carla’s feature writing has appeared in the Los Angeles Times, highlighting the marvels and foibles of Southern California and Hollywood. She sits on the Board of the Geffen Playhouse. Her first novel, Search Heartache, came out from Rare Bird Books in 2019. Shine Until Tomorrow is her second novel. Carla Malden lives in Brentwood with her husband and ten minutes (depending on traffic) from her daughter.