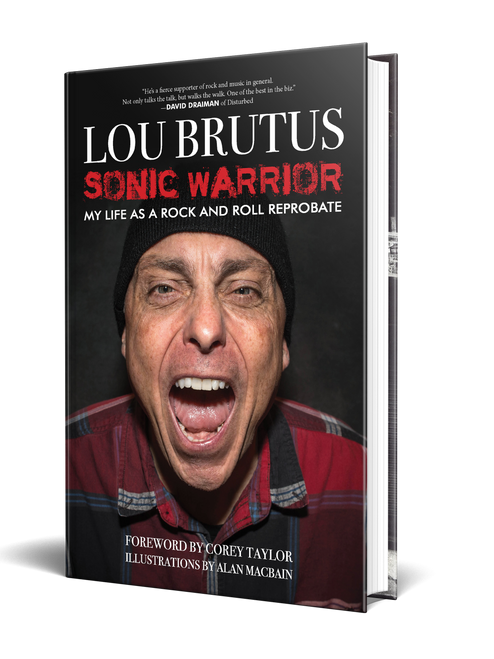 For lack of a better term, Brutus is a “Professional Music Fan.” He lives the dream of millions by traveling the Earth attending concerts and interviewing rock stars. He’s spent his life blasting tunes on the radio, becoming the first to play all of your favorite bands, and gaining access to literally thousands of music events. There is no one in the media who has seen more shows or conducted more on-site interviews than Lou.

He has severe hearing damage.

His nationally syndicated hardDrive with Lou Brutus is now in its twenty-third season. It airs on over one hundred radio stations each week in the United States, Canada and Europe. It's been instrumental in helping to break such platinum level acts as Avenged Sevenfold, KoRn, Slipknot, Disturbed, Godsmack, and Five Finger Death Punch. It has become radio’s preeminent Active Rock program. The weeknight version of the show, hardDrive XL, has also grown in reach over the last decade and is heard on dozens of stations every Monday thru Friday night. Additionally, Brutus has spent nineteen years at SiriusXM where he is Senior Director of Music Programming and has been heard as a host, interviewer, and imaging voice across a multitude of channels and formats.

Amongst his many adventures, Lou has traveled to the Arctic with Metallica, had a bottle of Chivas Regal poured down this throat by Hunter S. Thompson, drooled in his own lap after smoking weed with Snoop Dogg, chugged ale with Spinal Tap’s “Stonehenge” dwarfs, been in a tour bus that ran over a guy on the NJ Turnpike, and puked on the floor of many of the world’s most prestigious concert venues.

In addition, he is front man for two comedic punk rock bands (The Dead Schembechlers and Grumpy Old Punks) and cowritten the world’s only cow-punk-rock opera (“Hee Haw Hell”). Brutus has also produced his own series of comic books, The Adventures of Brutusman. Additionally, he has authored a coloring book parody of The Beatles “Yellow Submarine,” entitled Yorkie Submarine, which stars his beloved pup; Darla the Wonder Dog. Plus, he’s bottled his own line of micro brewed beers, Lou-in-Brau and Brew Loutus Ale. He appeared in a music-themed episode of NBC’s “The Apprentice,” shown up in various concert films, been immortalized in the song “Lou Brutus” by outsider singer-songwriter Wesley Willis, and had Eddie Van Halen name his all-star charity band, The Lou Brutus Experience, in his honor.

In what little spare time he has Lou is an accomplished photographer including over a decade on field for Major League Baseball. Gibson Guitars, Cheap Trick, Halestorm, and many others have used his music photography. Additional images from Lou have graced magazine covers as well as having been used by publications and media organizations around the world.

In the spring of 2020, Lou will release his long-awaited memoir, Sonic Warrior: My Life As a Rock N Roll Reprobate, with Rare Bird. The book features a Foreword by Corey Taylor of Slipknot and Stone Sour, as well as original illustrations by Alan MacBain. Brutus lives with his family outside Washington, DC, subsisting on a diet of black coffee, rock n roll, and tinnitus.

The Gamesmaster: My Life In The '80s Geek Culture Trenches with G.I. Joe, Dungeons & Dragons, and The Transformers [Signed]

The Gamesmaster: My Life In The '80s Geek Culture Trenches with G.I. Joe, Dungeons & Dragons, and The Transformers [Signed]