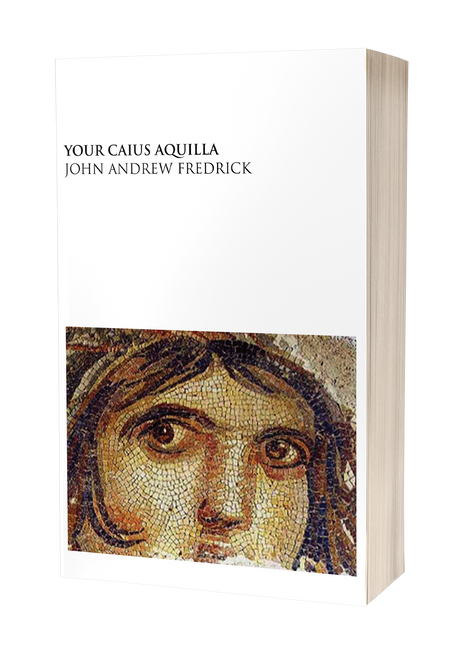 Set in ancient Rome, Your Caius Aquilla is composed of hilarious letters between a doting and brave but quite bumbling legionary and his beautiful, zaftig wife, Lora. While Caius fights barbarians (and fights off—often unsuccessfully—homosexual feelings for his fellow soldiers), Lora cossets her to-her adorable (and very cruel) children, and fends off (read: encourages/takes) lovers of both sexes. An act of fate and mistaken identity eventually brings Caius home for good from campaign—where, as he and Lora truly love each other, he belongs.

Despite the fact that handsome Caius Aquilla is a singularly brave Roman legionnaire, his brother-soldiers keep on having mishaps (fatal, no less) whenever he's around. A situation which doesn't endear him to them one little bit. One day, however, humping back to base camp with his platoon after a successful fray against some Gauls or Picts (he never seems to know which barbarians he's subduing), he spies a diminutive general being attacked by a swarm of killer wasps. Thinking fast, Caius throws himself upon the general (who, in attempting to swat away the mad, deadly insects, has fallen from his horse), thus sparing the superior officer a possible fatal fate. Caius thusly goes from pariah to golden boy, and shortly the hand of destiny (and a spelling error in the ranks' roll sheet) sends him home from campaigning—home to his to-say-the-least fanciful and beautiful wife Lora, where things really go off the rails.

A satire of U.S. militarism and imperialism, Your Caius Aquilla is a gem of a novel and a smart and sometimes too real portrait of a society beholden to its military.