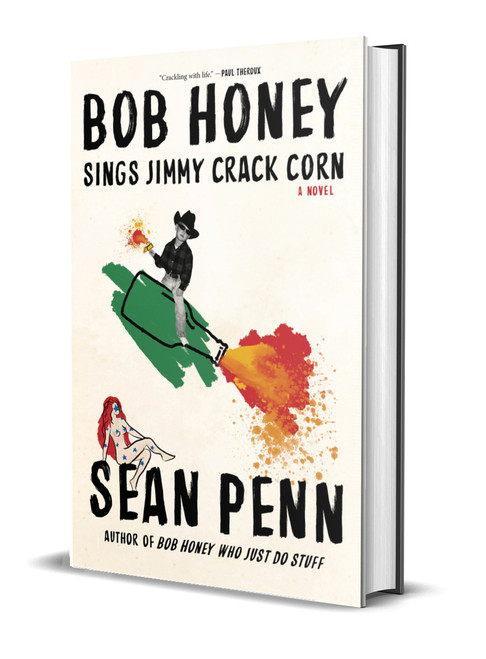 Bob Honey Sings Jimmy Crack Corn―the madcap follow-up to his debut novel, which was hailed by authors as diverse as Salman Rushdie, Jane Smiley, and Paul Theroux―explores the deepest recesses of American politics and culture. Bob Honey, the disillusioned divorcee with a penchant for murder by mallet, weaves his way toward Washington DC for the ultimate showdown with a certain nefarious “landlord,” but nothing is as it seems, and Bob will have more than just the government working against him. Part comedy and part thriller, Bob Honey Sings Jimmy Crack Corn establishes Sean Penn as a fixture of the literary landscape for years to come.
“Charmingly weird…Penn takes on an ambitious challenge here, and he succeeds spectacularly. Bob is a wonderful character, the kind of guy you can’t take your eyes off… that’s part of the book’s almost immeasurable charm.”
―Booklist (starred review)

“Penn paints with a broadly satirical, Vonnegut-ian brush. . . . he gives nods (by way of sly footnotes) to the likes of David Foster Wallace and Thomas Pynchon. . . . It’s good fun [and] a provocative debut.”
―Kirkus Reviews

“It seems wrong to say that so dystopian a novel is great fun to read, but it’s true. I suspect that Thomas Pynchon and Hunter S. Thompson would love this book."
―Salman Rushdie

“Before I started reading, I glanced over the table of contents. The first chapter is called ‘Seeking Homeostasis in Inherent Hypocrisy.’ I rolled my eyes and said aloud to no one, “fuuuck you.” Then, I read it, and it turns out it’s a goddamned novel for the ages. A straight-up masterwork, more relevant to this very moment than anything I’ve seen. Tom Robbins, Mark Twain, E.E. Cummings and Billy Bragg all just came in Chuck Bukowski’s pants. Whether it’s your cuppa tea is something I cannot know. But sweet Jesus it was mine.”
―Sarah Silverman

Sean Penn won the Academy Award for Best Actor for his performances in Mystic River and Milk, and received Academy Award nominations as Best Actor for Dead Man Walking, Sweet and Lowdown, and I Am Sam. He has worked as an actor, writer, producer, and director on over one hundred theater and film productions. His journalism has appeared in the San Francisco Chronicle, The Nation, and The Huffington Post.

Cherry on Top: Flirty, Forty-Something, and Funny as Fuck by Bobbie Brown