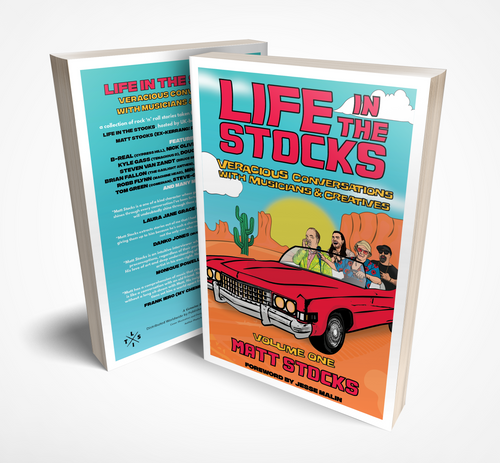 Matt Stocks, host of the Life in the Stocks podcast, and former presenter at Kerrang! Radio and Scuzz TV, and writer for Metal Hammer and Classic Rock, is releasing his first book, Life in the Stocks: Veracious Conversations with Musicians & Creatives in December of 2020 with Rare Bird. The book will also feature an introduction by Jesse Malin.

Matt Stocks is a UK-based, radio and TV presenter, journalist and filmmaker with ten years’ industry experience. He hosted the evening show on Kerrang! Radio for three years and was nominated for the Best Specialist Show of the Year at 2013 Arqvia Radio Awards—he lost out to Ronnie Wood of The Rolling Stones.

After leaving Kerrang!, he did a year’s stint on the breakfast show at Team Rock Radio, where he also hosted a punk show and a talk show called Soundtrack Apocalypse. He then moved over to television, presenting on the Sony-owned UK channel Scuzz TV for three years, whilst writing regular features and reviews for Metal Hammer and Classic Rock magazine. He also wrote, produced and directed a feature-length documentary on Australian hard rock band Airbourne called It’s All For Rock ‘N’ Roll, which has had over 130,000 views on the band’s YouTube channel.

I’ve known Matt for many years now, so I can safely say that he’s a friend. I must admit though, I’m first and foremost a fan of his work. I’ve done hundreds of interviews all over the world, and there are very few people who can hold a candle to this man. He has a natural way about him: his candor, his pacing, and his genuine feel are what make him the perfect person to interview people—and the fact that his voice isn’t annoying helps. Matt is also very much living the life of someone closely connected to music, art and culture. He’s the kind of guy you could just hang out and shoot the shit with—for hours and hours. And the funny thing is, the last time I saw him we did exactly that: we talked until the sun came up, having drinks, listening to music and talking about life. This is why we became fast friends. He’s genuine and he's real, and he just really “gets it.” I guess it’s hard to put into words if you’ve never met or hung around with Matt, but he’s a one in a million type guy, and I have a ton of love and respect for him. He’s got stories for days and a sharp wit to boot, and I’m super stoked on the potential of this book. He truly deserves it, and has been working tirelessly to establish himself—nothing was handed to him. Matt is a gentleman and a damn animal simultaneously. I’m honored to call him a friend, and I’m so happy he’s getting the opportunity to let the world know about his story and his knack for allowing others to tell theirs. As soon as this book is done, I’ll be diving in headfirst to what I’m sure will be a great read. This has been a long time coming in my opinion.