The First 100 Years of the ACLU Handbook edited by Steven C. Markoff 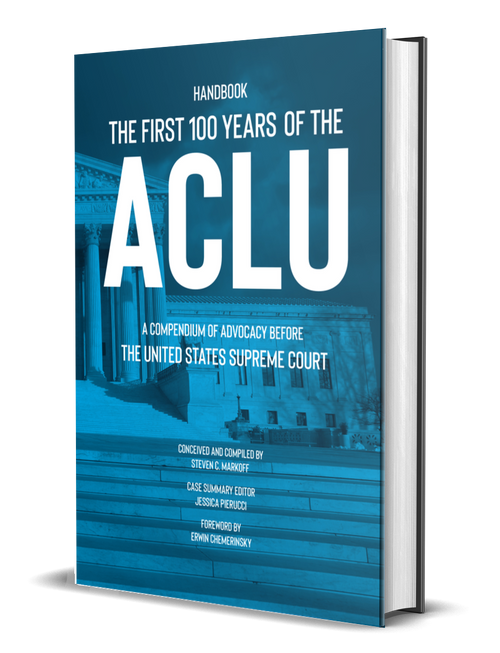 The First 100 Years of the ACLU Handbook edited by Steven C. Markoff

The ACLU was involved in excess of 1,190 cases in the U.S. Supreme Court as a party, counsel of record/ACLU attorney, or as the filer of an amicus (friend of the court) brief, during 94 of its first 100 years, ending in January 19, 2020. This handbook summarizes all the facts and statistics from its companion three-volume set of over 1,190 cases (from June 8, 1925, Gitlow v. New York), and contains three examples of the case summaries found in the three-volume set.

From the Foreword by Erwin Chemerinsky

The American Civil Liberties Union (ACLU) is unique among organizations. It exists solely to protect civil liberties and civil rights. It has done this brilliantly for a century. It has done so at the national level and the state and local levels. It has done so in the legislative and political processes and in the courts. Not surprisingly, many of these judicial battles have ended in the U.S. Supreme Court and led to crucial decisions that affect all of us, often in the most important and intimate aspects of our lives.

But whether one agrees or disagrees with the ACLU in particular areas, there is no denying the importance of the ACLU as a force in the U.S. Supreme Court and in American law. Thanks to Steven Markoff’s efforts, there now is a comprehensive listing of all of the U.S. Supreme Court cases in the last century with ACLU involvement. He provides clear and concise descriptions of the cases.

Erwin Chemerinsky is the Jesse H. Choper Distinguished Professor of Law and Dean of the Berkeley Law School, University of California at Berkeley. He is the author of 15 books, including Free Speech on Campus and Closing the Courthouse Door: How Your Constitutional Rights Became Unenforceable.