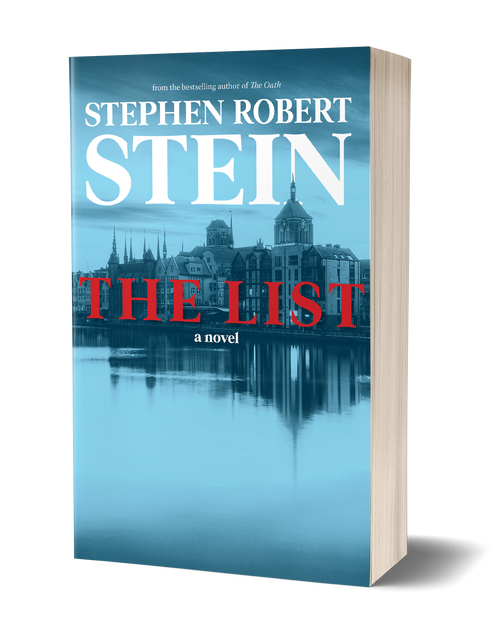 The List is an exceptional work of historical fiction that brings to life the untold story of the Holocaust and slaughter of not just Jews, but over 150,000 Serbs and Gypsies who were executed while Croatia was under fascist rule during World War II.

Martin Brosky escapes from Auschwitz and joins up with the British Jewish Brigade toward the end of the war and meets Sylvia Harvitz, a veteran of Tito’s Partisans and survivor of a Croatian concentration camp, Start Gradiska. Martin’s cries for revenge parallel with Sylvia’s need to avenge the deaths of her parents as they travel together carrying out reprisals in Europe, and later in South America. Along with Mordecai, an Iranian Jew who also joins the Jewish Brigade, Martin and Sylvia become Mossad intelligence officers for Israel carrying out their vengeful missions together.

The List brings together the names and activities of nazis and Croatian war criminals, including Josef Mengele, who avoided prosecution for their war crimes and travelled to South America under the direction and help of the Vatican. Protected by dictators in Argentina, Chile, and Brazil, these men became targets for Martin and his Mossad agents. Readers will discover that vengeance is not without pain.

The List is Stephen Robert Stein’s second novel. He is a retired orthopedic surgeon living in rural Indiana with his wife Becky and they have two children, Matthew and Alyssa. Leaving his thirty year practice in Phoenix, he moved out to Batesville, Indiana where he concentrated on writing and enjoying the midwestern lifestyle. They have traveled extensively throughout Europe laying a solid historical foundation for his first novel, The Oath while delving deeper into the reasons behind the Holocaust. His passions include Scuba diving, flying and exploring new environments. He presently serves as the President of the Batesville School Board and is active as a Director of the Ivy Tech Community College Foundation.