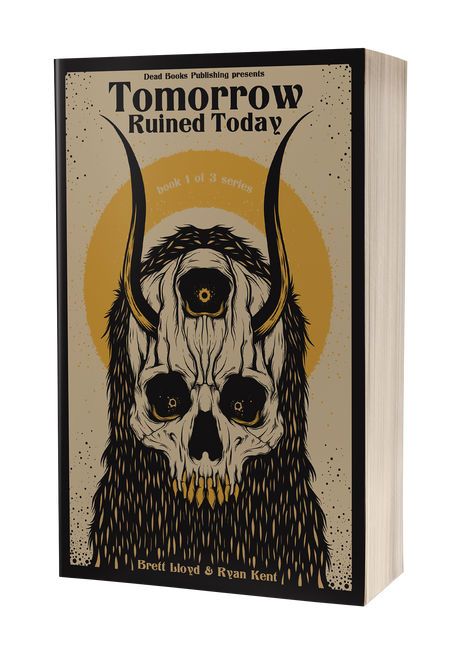 Ryan Kent and Brett Lloyd played shows together in different unknown bands, each as the respective vocalist. They got along well, and wrote many words that were often shouted over microphones more than they were read. However, contrary to typical next steps musician pals take, they didn't end up collaborating musically. Instead, they co-opted the idea to release split books together―one half dedicated to Brett, the other half dedicated to Ryan―just like two underground bands joining forces to release split 7-inches...and, henceforth, Dead Books was born.

Tomorrow Ruined Today is the first volume of a three-part Dead Books split release series by Brett Lloyd and Ryan Kent, featuring short- and long-form poetic works that are as personal as they are observational, with "depth and careful depictions of the emotions [that] lay on the tip of each word like a serial killer on the balance between fantasy and performing reality," as described by Jeff Forrest of The Universal Hitchhiker after Tomorrow Ruined Today was first published in 2019 as a limited edition paperback prior to Rare Bird's worldwide trade release.