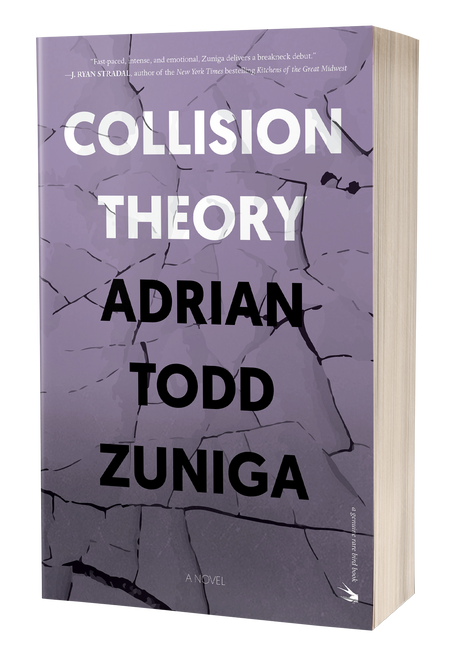 It would be easier for Thomas Mullen to move on from what he’d seen if Sarah stopped calling. It would be even better if she stopped appearing to him, and only him, to remind him of what he was powerless to stop.

But, months later, after Thomas loses his phone and the random woman who recovers it arranges to return it to him, his predicament intensifies. This woman tells him that while she’s had his phone, his mother has called. His mother really needs him to call her back. And who is Sarah, this woman asks Thomas. His mother asked her if she was Sarah. And how could she not have said yes? It seemed to make his mother so happy.

Collision Theory, Adrian Todd Zuniga’s memorably heartfelt and headlong debut novel, unfolds with its own particular velocity. After Thomas was an unexpected witness to a suicide he scrambles to reconcile whether there might have been any way to prevent it. And he wonders whether the only way to undo the impact of an unexpected thing is to do something unexpected in turn. But the phone won’t stop ringing.

Collision Theory’s suddenness, its unexpectedness, its humor, and its humanity make for an unforgettable, surprising, and emotional read.