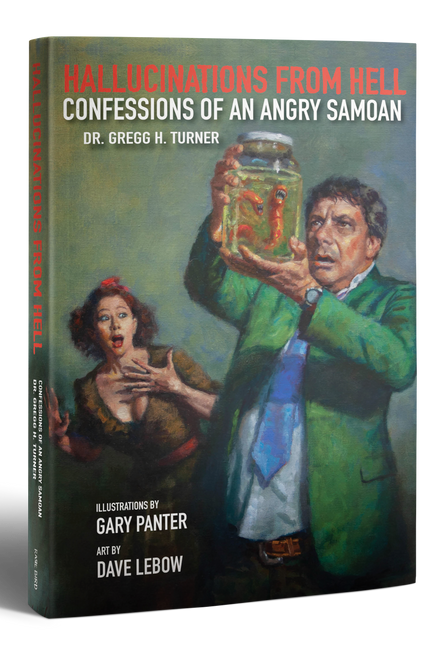 "Gregg Turner follows up his long legacy of rambunctious arrested adolescence―don't forget he is both a founding member of punk shock rock band The Angry Samoans, as well as a 1980s Creem Magazine contributor―with this collection of scatalogically-challenged tales of hyperbole. There's a reason that some areas of the USA are designated as 'fly-over', and in quite a few of Mr. Turner's stories he makes this abundantly clear."
―Chris D., singer/songwriter of bands The Flesh Eaters and Divine Horsemen, and writer of fiction and film studies

"Gregg can write. Even In a story set in the world of mathematics (a world in which I would customarily fear to tread] one discovers, for instance, "The fact that this veteran oldster was able to accomplish a remarkable mathematical feat heartened the cockles of the math community of academes.” Good stuff, Gregg’s stories. Real good stuff."
―John Mendelssohn, author of The Kinks Kronikles and Gigantic: The Story of Frank Black and The Pixies

"Gregg takes the essence and ethos of punk rock and spews it all over the page. I’m just glad I don’t have to clean it up."
―Andy Shernoff, The Dictators

"This is a fun ride (at 110mph) through an American landscape formed by late stage capitalism and littered with the smoking remains of alien abductees, grave-robbers, dominatrixes (dominatrii?), and a definitely alien rock star, as seen through the O.G. punk rock eyes of Gregg Turner, the Angriest Samoan."
―Dr. Nicole Panter Dailey, psychologist and manager of the Germs from 1977-80

"Grzegorz Laszlo Turner has made the US his home since 1963. In the decades since, he has brilliantly fused the brightest tendencies in contemporary Magyar and American prose. His body of work, bristling with post-modern tenderness and compassion, places him firmly on the short line for Nobel consideration."
—Richard Meltzer, author of The Aesthetics of Rock and A Whore Just Like the Rest: The Music Writings of Richard Meltzer

Gregg Turner first emerged from the rock crit heart of darkness in the mid 1970’s as a contributing writer to Back Door Man magazine, an LA-oriented fanzine gushing vitriol and bile per anything hard rawk and roll. The “bile” part of this was noticed by the astute editors of Creem magazine, who apparently needed someone to “chop meat” (Blondie producer Mike Chapman suggested Turner pursue butchery as a career for an unflattering Suzie Quatro review). Turner posted a relatively long meat-chopping tenure at Creem from 1976–1988.

He first cut musical teeth in the 1976 proto-punk band from LA called VOM (as in vomit) which lasted two improbable years and ultimately morphed into the Angry Samoans. The Sam’s gained a rather sizable following in the 1980s, purveying catchy tunes encouraging their fans to poke their eyes out (“Lights Out”) and consider saving “Hitler’s C*ck.” Turner currently persists with solo recording misadventures, a third LP expected by August 2021.

Dr. Turner moved to Santa Fe, New Mexico in 1993, still lives there, and has two teenage daughters, Nico and Scarlet. He was a tenured mathematics professor at New Mexico Highlands University until recently retiring. He received his Ph.D. in mathematics from Claremont Graduate University in 1991. The title of his 1991 doctoral dissertation was “Stabilization of Hybrid Control Systems in the Presence of Feedback Delays.” Lack of “Control” and “Feedback” seemingly an ongoing issue with the dude since he first set ears to the Velvet Underground’s White Light/While Heat at age fourteen.