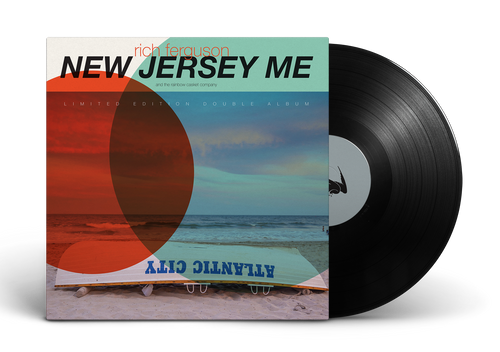 The official companion to Rich Ferguson's debut novel, New Jersey Me, seventy-eight minutes of audio experience narrated by Rich Ferguson with Butch Norton (The Eels, Lucinda Williams), Josh Haden (Spain), and Tyson Cornell (Rare Bird) writing and performing to the animated sounds of Ferguson's voice, the magnetic delivery of his storytelling, and the tragically satiric layering of his characters.

Set amidst the backdrop of the troubled town of Blackwater, New Jersey, a Bruce Lee- and Bruce Springsteen-devoted young hero journeys toward adulthood in this devastating yet intelligent debut novel from poet and musician Rich Ferguson.

New Jersey Me explores an ensemble cast of unique characters, including Blackwater's hometown nuclear power plant; a beauty named Baby; Baby's hell-bent-for-prison boyfriend, Terry; a Mary Kay mom high on Vicodin and Bloody Marys; and an old, old tree with a taste for blood. The son of the local police chief, Mark dreams of escaping the small town's conflicting and oppressive codes of manhood. In the meantime, though, Mark lives a boy’s life, Blackwater-style: netting fish that have been killed by sudden coldwater emissions from the nuclear plant; kidnapping a chimp from the local circus; selling dirty socks to a local eccentric who may hold the key to Mark's escape; dating a one-legged girl; and observing the increasingly mysterious behavior of his best friend, Jimmy.