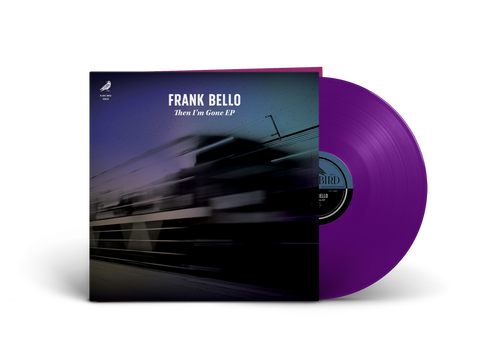 Introducing the debut solo release from Anthrax bassist, Frank Bello,
Then I'm Gone, a split deluxe 12" gatefold EP with three songs, "Then I'm Gone," "It Won't Be Long,"
and "See Me Now," plus a special abridged vinyl audiobook narrated by Frank Bello from his autobiography, Fathers, Brothers, and Sons (coauthored by Joel McIver),
with additional new music by Frank Bello and Rare Bird.

Side B
First Kiss
Compass Point
See Me Now [Revisited]

All include:
—a digital download code of the full vinyl audiobook in the sealed vinyl jacket
—a monthly email with links to audio, video, instrumentals, and bonus material

International shipping outside of the US continues to be extremely expensive. Unfortunately, there isn't anything we can do about that. We don't set the international shipping rates; nor do we profit from how expensive they are. Unsigned books and records are available worldwide through our distribution partners here, typically available wherever books and records are sold.

About Fathers, Brothers, and Sons (with Joel McIver):
Frank Bello, bassist with the legendary New York thrash metal band Anthrax since 1984, has sold over ten million albums, travelled the globe more times than he cares to count, and enthralled audiences from the world’s biggest stages. His long-awaited memoir would be a gripping read even if its pages only contained stories about his life as a recording and touring musician. While those stories are indeed included―and will blow your mind―Bello also focuses on deeper subjects in Fathers, Brothers, and Sons. Once you’ve heard his life story, you’ll understand why.

About Frank Bello
Frank Bello is an American musician, most notable as bassist for the legendary thrash metal band Anthrax. On hiatus from Anthrax, he briefly performed with Helmut, but he has appeared on every Anthrax release since 1985. He lives in New York.

About Joel McIver
Joel McIver is the bestselling author of Justice for All: The Truth About Metallica, which has been translated into nine languages, and several other books. He has written for Rolling Stone, The Guardian, Metal Hammer, Classic Rock, and he is the occasional guest on BBC. Classic Rock magazine has called him “by some distance Britain's most prolific hard rock/metal author.”