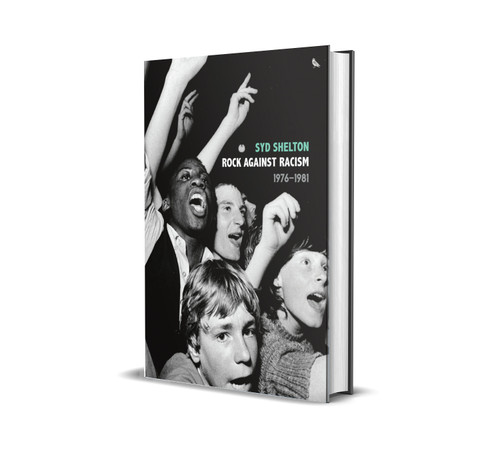 An outstanding photography book documenting a movement that rocked the world.

Syd Shelton: Rock Against Racism is a body of photographs that Syd Shelton produced for and about the British Rock Against Racism movement (RAR) of 1976–1981. For Shelton, this work was a socialist act, what he calls a “graphic argument,” on behalf of marginalized lives. His practice of photographic activism began in 1973 when he was driven to document the socio cultural and political dynamics expressed on the streets of Sydney by urban Australian Aboriginal communities, the working class, and the architectural landscapes of these groups. Shelton’s first solo show in 1975, “Working Class Heroes” at the Sydney Film-makers Cooperative, established his distinct activist eye.

Shelton joined RAR in early 1977 on his return to England from Australia. He did so because he found his birthplace a more racist country than it had been when he left. This was marked by the increased political presence of the National Front, notably its gain of some 119,000 votes in the Greater London Council Elections of May 1977. Shelton, like millions of others, feared for the future of multi-cultural Britain. His contribution to RAR was to be on the London committee, to create graphic material with other RAR members such as the RAR publication “Temporary Hoarding,” posters’ badges and his photography—RAR did not have an official photographer. Shelton’s instinctive need to document RAR—its events, contributors, and supporters—has resulted in the largest collection of images on the movement. Alongside his documentation of RAR, Shelton took photographs of what he calls “the contextual images,” the lives and landscapes that were defined by others as “different,” and that often fueled racist acts of violence by simply being.

What is presented here are Shelton’s authoritative visual statements as participant-photographer on the social tempo in Britain at this time and the activist potency of RAR. As collective activism, RAR’s success was dependent on individual contributions to fuel the movement’s activities across the country. This unique national, and eventually international, charge incorporated the visual dynamic of how Black and white RAR contributors and participants styled their bodies as another antagonistic tool against racism. These were acts of style activism—the making of an activist identity through the considered composition of clothes, accessories, hairstyles, makeup, and body language. Shelton’s images prompt us to remember that the individuals at RAR carnivals, gigs, and demonstrations were the event—they were RAR.

There are many versions of what RAR was and its legacy. Syd Shelton: Rock Against Racism provides an auto/biographical telling of that historical moment. It reflects on how Shelton’s work as a photographer contributed towards social change at a critical moment of political and racial tension in Britain.