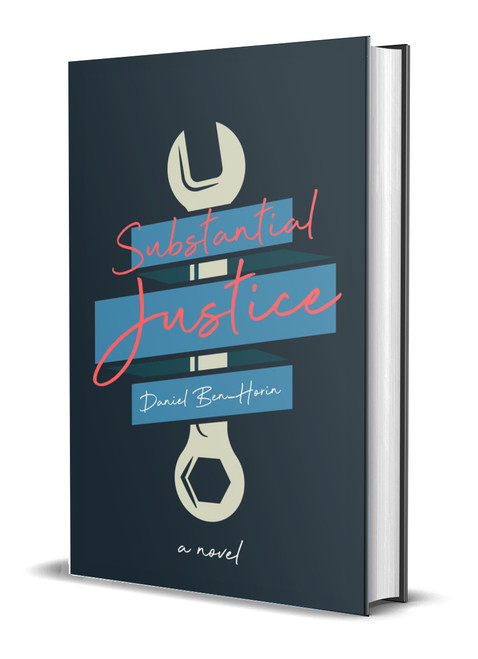 Substantial Justice chronicles the 1985 misadventures of Spider Lacey, a laconic Citroen mechanic, and Siobhan Mollenkopf, a lawyer who has reappeared in Spider’s life after a ten-year hiatus. Things start well, then devolve when Spider’s best friend, a marijuana grower and controversial talk-show host, is murdered. Spider and Siobhan spiral into a world of white supremacists, political activists, lumber tycoons, motorcycle gangs, early online geeks, tree-spikers and law enforcement. The terrain is San Francisco, Mendocino County, New York City, and Arizona. A cross between Carl Hiaasen and E. L. Doctorow, Substantial Justice is a comic thriller and a surprising love story that delights in the vicissitudes of the era.

"It’s not often that a well-plotted thriller abounds with incisive and amusing social history. In fact, I can’t think of one, or certainly none in the league of Daniel Ben-Horin’s Substantial Justice. If you were around in the late 70’s or early 80’s, particularly in San Francisco, rural Northern California, or New York City, the tonic shocks of recognition come thick and fast. If you weren’t, you’re in for a different sort of treat. Either way, the details are revealing and exact. Then there is the love story that frames the murder story, plus the weirdly contemporary far-right militia story and the early-internet subplot. Best of all, the romantic leads are witty and complicated and you’ll root for them just as you root for the pure-hearted pair in a Jane Austen novel. There it is―Raymond Chandler meets Jane Austen in post-Vietnam America. Excellent stuff."
―William Finnegan, Pulitzer Prize-winning author of Barbarian Days

"Substantial Justice captures the spirit of San Francisco at the very dawn of the Internet age, long before the arrival of the tech bros, set in a time when personal computing was just starting to slip into the public conciousness. Daniel Ben-Horin has woven a fast-paced tale that offers authentic portraits of both the American Left and Right, exploring the roots of our current Trumpian dystopia."
―John Markoff, author of Machines of Loving Grace

"Substantial Justice is a joy to read―who can resist a mix of intrigue, cannabis, and fraught romance? It’s a literary thriller with a wildly accurate sense of the era it depicts―and great lines uttered by great characters. A winner."
―Joan Silber, PEN/Faulkner Award–winning author of Improvement

“Ben-Horin’s comic death rattle of the sixties unleashes a wondrous set of lost souls who ricochet around the Reagan era following their bliss but finding only each other—which leads to sex, murder, and hopeless political causes.
As a view of America it is strangely hopeful.”
—Ron Shelton, writer/director of Bull Durham and White Men Can’t Jump

“Ben-Horin’s novel of suspense kept me flipping pages as if
it were a news crawl of breaking headlines.”
—Gregory Maguire, author of Wicked

Daniel Ben-Horin made his literary debut as editor of the Fountain Pen literary magazine of McBurney Junior High School in New York in 1960, but detoured in favor of a career as a journalist, early online flaneur, and social entrepreneur. He has written nonfiction for the New York Times, Mother Jones, the Nation, and other periodicals. He attended Bronx Science and the University of Chicago, was fired by the Arizona Republic, edited the Arizona New Times, organized tenants and media workers in San Francisco and built, over the course of thirty years, a global nonprofit called TechSoup. This is his first novel.