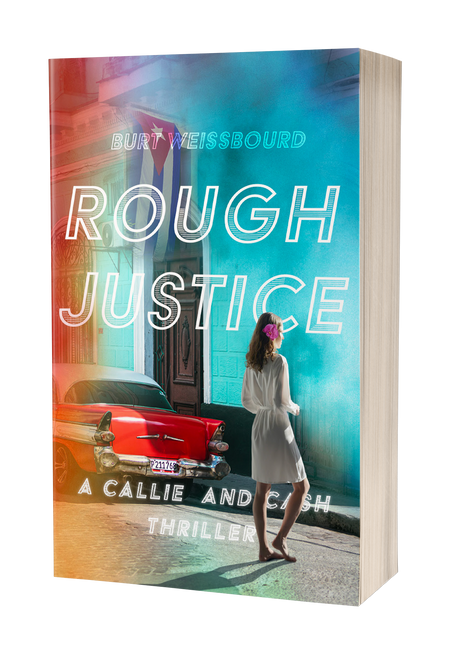 Two years later, Callie’s ex-husband, a French investigative reporter, is almost killed when he shows up at her restaurant, after a fourteen-year absence, asking for her help. Callie has no choice but to take on an unlikely ally, Cash Logan. This improbable, incompatible team has to save her ex, her business, and ultimately their own lives.

Now in Rough Justice, Callie and Cash are back, and their world is about to explode.

The scene is set as Callie and Cash are eating a late dinner upstairs at her restaurant, The Bronze Pig.

It’s been a year since they saved her ex-husband’s life and subsequently had to take on unexpected, lethal adversaries. During that process—confronting kidnapping, murder and assassins burning down her restaurant—they came together, and unexpectedly, they discover that they care deeply, romantically, for one another. Now, they’ve grown comfortable together, no, more than that, against all odds, their feelings for each other have evolved beyond anything they’ve ever known—they’re wildly in love.

So, imagine their surprise when they get an unexpected, half-Algerian female guest, twenty-five-year-old Sara, showing up at the restaurant and insisting on telling them her shocking, unbelievable story. Someone is trying to kill her, and they’ve stolen her identity. She needs their help now, and she has a stunning, life-changing secret to tell.

Yet, again, Cash and Callie assemble their unconventional ragtag family—including peg-legged Andre, and Itzac, “The Macher.” Together, they go to war with formidable adversaries to save Sara, and ultimately their own lives. The fierce battle leads them to Cuba where they have to launch an audacious offensive that shocks even them…and will absolutely take your breath away.

“These books transcend the expectations of genre fiction to become literature.”

“Weissbourd’s writing reminds me of the great Raymond Chandler mysteries.”

“One of the most accomplished elements of this highly entertaining novel is the way that the action hinges on the emotional and interpersonal arc of the story rather than the plot twists themselves…it’s Callie’s relationships with the central figures, particularly Cash…that give the story its realistic and heart-stopping impact.”

“His skill as a writer is obvious and there’s a level of polish present in these pages you don’t find with less experienced authors…Danger in Plain Sight sets the stage well for Burt Weissbourd to have an impressive run with this character, and he will undoubtedly attract a growing audience with each new additional entry in the series.”

“Weissbourd delivers a polished page-turner about terrorism, money laundering, and the price of sins rooted in avarice…Tart dialogue, explosive set pieces, and a dexterous narrative style that favors velocity over exposition add to the book’s appeal…Thrillers may be a dime a dozen, but memorable characters deserve a longer half-life, so here’s hoping Callie and Cash make a welcome return soon.”

“A Woman gets in touch with her inner action hero in this bracing thriller…as one character toasts, ‘Bravo, Callie James.’”

“An inventive thriller whose unconventional heroine learns how to live again.”

From 1977 until 1986, Burt Weissbourd developed screenplays working with screenwriters including Frederic Raphael (Two for the Road), Alvin Sargent (Ordinary People), Andy Lewis (Klute), Stewart Stern (Rebel Without a Cause), and many others. He also worked with actors including Robert Redford, Lily Tomlin, Goldie Hawn, Sally Field, Diane Keaton and Al Pacino. During this time he produced films such as Ghost Story, based on the novel by Peter Straub and starring Fred Astaire, and Raggedy Man, starring Sissy Spacek and Sam Shepard. Weissbourd lives in Long Island, New York, with his wife, Dorothy. He has three adult children and two grandsons.