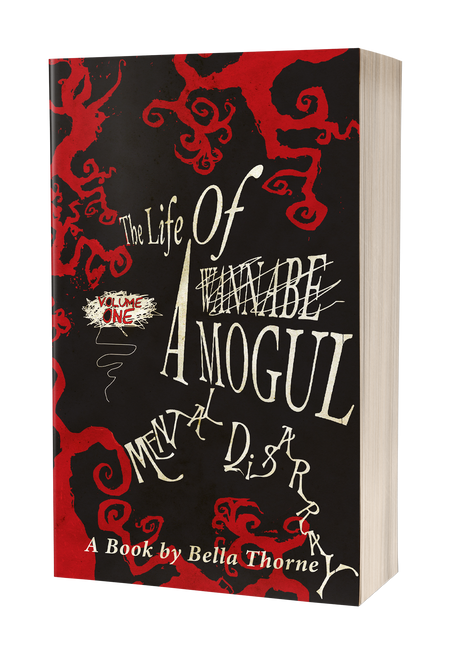 The Life of a Wannabe Mogul: Mental Disarray, Bella Thorne’s collection of illuminating and inspiring poems chronicles her personal struggles, relationships, and wild-child lifestyle, all with her trademark wit and wisdom.

"You'll always be the Cece to my Rocky."
―Zendaya

"Hey, I didn't read this book. Bella gave it to me and I left it on an airplane."
―Diplo

"Bella is one of those rare artist who is utterly fearless. Her courage to show you who she truly is―including hopes, fears, and vulnerabilities―is what makes her a relevant and meaningful voice for this generation."
―Scott Spear

"I just became illiterate after reading this. But the nude photographs were still very interesting."
―Marilyn Manson

"Yo, sitting here smokin', checking out this book of poems from my homegirl Bella. Damn girl, you dope as a mothafucka. I didn't know you had rhymes and rhythms and such words of magnitude and gratitude with just a little bit of attitude. yes, make sure you go get that book from my homegirl Bella. Book of rhymes certified so says Snoop Dogg. Oh yeah, she's a poet and she know it and she ain't afraid to show it. And if you happy and you know it, BLOW it. This for you, Bella, do ya shit girl!!"
―Snoop Dogg

"Bella Thorne is raw in every sense of the word: tender, juicy, bloody, revealed. Nobody does what she does, which is tell us how the fuck she feels and that it's okay to fucking feel it. I honor her."
―Lena Dunham

"Bella Thorne writes poetry as a kidnapper might leave a ransom note. It's a threat. And I don't think she's fucking around."
―Jason Reitman

"I haven't read Bella's book, but if it's anything like her then you're in for a treat. She's honest like so few are these days. She's a rule breaker. Doesn't stay in her lane. Pushes herself beyond what you'd expect. She misbehaves. Doesn't follow the rules. I love her for all of that. All women could benefit from behaving a little less. It's an exciting prospect right?"
―Jessica Chastain

"Bella...is like an opened Pandora's box! Endlessly overflowing with golden delight and darkest seriousness. Your life could be altered if she catches your eye."
―Melissa Leo

Bella Thorne is an American actress, singer, and music video director. She began her career at six weeks old as a child model, and eight years old with roles in in the television series My Own Worst Enemy and Big Love, Thorne gained mainstream notoriety for her starring role on the Disney series Shake It Up as well as Freeform’s Famous in Love. In 2018 she signed with Epic Records and began work on her debut album. In addition to her artistic pursuits, she started a makeup line called Thorne by Bella. An active internet personality, Thorne’s social media accounts have accumulated more than thirty-seven million followers.