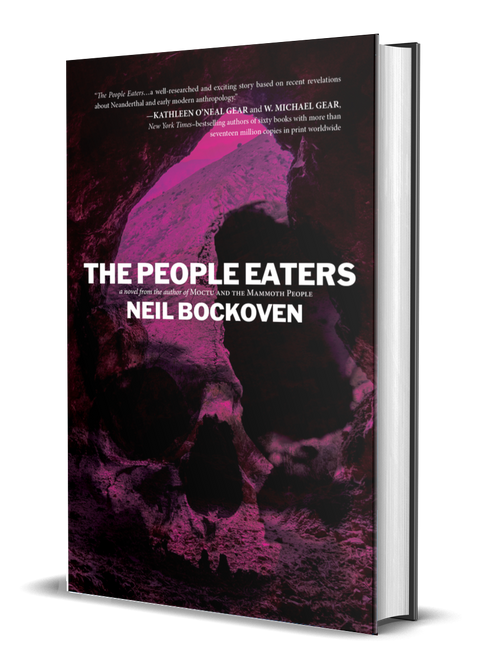 The second in the Earth Peoples series, following the widely-acclaimed Moctu and the Mammoth People, a story of love, life, and survival in Ice Age Europe.

The People Eaters continues the saga, starting explosively as four separate tribes—two Neanderthal and two Homo sapiens—are in great turmoil. While Moctu, Nuri, and Nindai of the Nerean tribe (Homo sapiens) are visiting their friends and picking up Moctu’s hybrid baby, Elka, at the Krog (Neanderthal) shelter, the feared, warlike and cannibalistic Shiv (Neanderthals) attack. Over the next long struggle, Moctu, Nuri, and the Nereans all learn much about themselves, their friends, and their enemies.

“Very rarely does a novelist bother to keep up with the latest scientific research, but Neil Bockoven is an exception who cares as much about telling a good story as a true one about the past.”
—Dr. Pat Shipman, notable anthropologist and author

“Bockoven’s achievement is masterful…urgent, timely and fascinating… After reading this novel, you may never think the same way about the human species…”
—Joseph Di Prisco, author of The Good Family Fitzgerald and Subway to California, and founding chair of the New Literary Project

“Every bit as involving and educational as Jean Auel’s celebrated Clan of the Cave Bear series, and deserves the same degree of acclaim and recognition for its blend of science-based insights and strong characterization and drama.”
—Diane Donovan, editor of California Bookwatch and senior reviewer of Midwest Book Review

“Bockoven takes readers to the crossroads of paleo-human evolution here and, in this unique and powerful series, raises the bar for historical fiction.”
—Andrew Cotto, award-winning author of Pasta Mike and regular contributor to The New York Times

“Neil Bockoven has done it again with The People Eaters—a bracing tale of our ancient ancestors. Vivid, smart and surprising.”
—Mark McDonald, award-winning New York Times foreign correspondent and author of the Iraq war novel Off the X