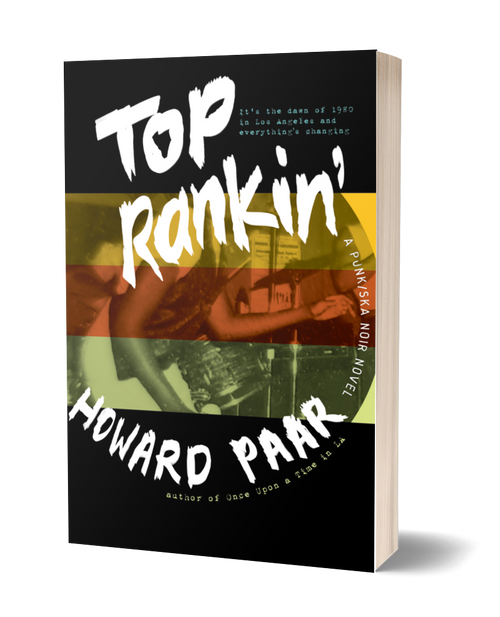 It's the dawn of 1980 in Los Angeles and everything’s changing.

Punks, dopers and assorted miscreants play in the decaying homes of Hollywood golden era stars. The playfully decadent, diverse LA punk scene is under threat from the violent, misogynistic hardcore scene not to mention the suddenly cheap, high grade heroin that's tempting many who haven’t managed to get their artistic careers in gear yet.

James Dual wants no part of that and inspired by the racially integrated punky ska revival in England starts the ON Klub, a ska, soul, and reggae club at the rough and ready pre-gentrified Silver Lake end of Sunset Blvd. He and partner in crime, actor spawn Drea Dresden, try their best to make the transition out of the 70’s in one piece.

As the hole in the hillside dump of a joint successfully explodes there's no fighting on the ON Klub dance floor shared by young Jamaicans, sharp-dressed Asian American girls, South Central kids, London escapees, mods on scooters from Orange County, Latino kids from the neighborhood―all united by the inspiring vinyl they can’t hear on the radio or anywhere else in the US. This is they only place these kids can go where everyone’s welcome and they are treated equally so it becomes home to them.

All this attention, not to mention over capacity crowds and under age kids leads to a visit from the soon to be notorious Rampart police division who threaten closure and worse. A journalist friend brings a mob related music man connected to Bob Marley to visit the club, who becomes obsessed with the charismatic young Jamaican singer Loraine Sulley, who is performing that night.  He lures James with promises to bring in iconic ska and reggae artists to perform at the club if James convinces Loraine to sign to Marshall’s planned new record label.  In the meantime, James and Drea are threatened by two corrupt Sheriff’s homicide detectives who are still trying to nail an innocent James for the death of a band that occurred soon after he first arrived in LA.

James arranges to have Drea hide out in London until things cool down. While there she meets controversial new English band Vortex and subsequently joins them for their first US tour where they  warn what things could get like if the unthinkable happens and washed up B movie star, US Republican Presidential candidate Ronald Reagan is elected.

Capturing the spirit of LA in 1980, Top Rankin' is populated with real-life characters from the music world in Los Angeles, New York, and London, and leads readers on a tour of the dangers and importance of providing refuge on the precipice of major political upheaval.