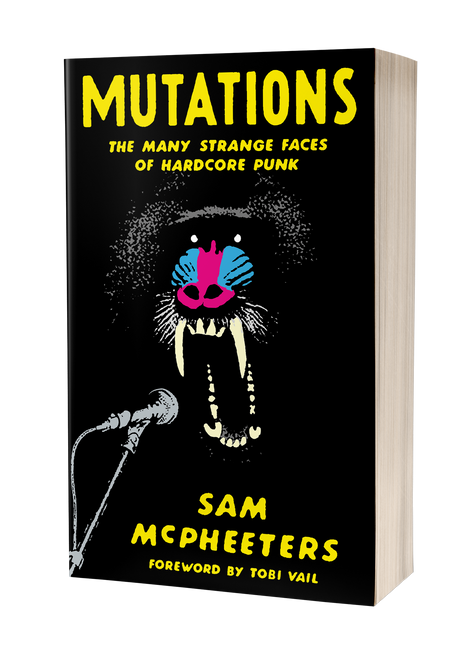 GQ's One of the Best Books to Read Right Now
"McPheeters, in his music and now in Mutations, has always had a keen eye for the ridiculous and an unsparing eye for himself, and the result here is a beautiful and honest epitaph for a bygone time and the people who survived it."
―GQ

"It’s an idiosyncratic compilation, but McPheeters has a knack for synthesizing what makes hardcore so intellectually stimulating underneath all that screaming."
―Jim Ruland in the Los Angeles Times

"McPheeters style of writing is very smooth, it’s splendidly easy on the eye, it’s conversational and welcoming. He sees the joy of tucking into something wholeheartedly but is not afraid to pull it apart from the inside."
―The Quietus

"Mutations is the memoir that hardcore punk needs."
―Pitchfork

"I couldn’t put Sam McPheeters’ book Mutations down. I tore through it in a day and a half, skipping meals and work along the way."
―Vol. 1 Brooklyn

"An absolutely essential study for students and fans of the Punk Rock movement in music, "Mutations: The Many Strange Faces of Hardcore Punk" is an extraordinary and pitch-perfect history."
―Midwest Book Review
How can so many people pledge allegiance to punk, something with no fixed identity? Depending on who and where you are, punk can be an outlet, excuse, lifestyle, escapism, conversation, community, ideology, sales category, social movement, punishable offense, badge of authenticity, reason to drink beer forever, or an aesthetic of belligerent incompetence. And if someone has a strong belief about what punk is, odds are they have even stronger feelings about what punk is not.


Sam McPheeters championed many different versions. Over the course of two decades, he fronted Born Against, released dozens of records and fanzines, and toured seventeen times across the northern hemisphere. In this collection of essays, profiles, criticism, and personal history, he examines the diverse realms he intersected—New York hardcore, Riot Grrrl, Gilman street, the hidden enclaves of Olympia, and New England, and downtown Los Angeles—and the forces of mental illness and creative inspiration that drove him, and others, in the first place.

Sam McPheeters was born in Ohio and raised in upstate New York. In 1981, at age twelve, he co-authored Travelers Tales: Rumors and Legends of the Albany-Saratoga Region. Starting in 1989, he sang for Born Against, Men's Recovery Project, and Wrangler Brutes, touring seventeen times across North America, Europe, and Japan. Since 2009, he has written for Criterion, Vice, and The Village Voice, among others. He currently lives in Pomona, CA, with his wife.