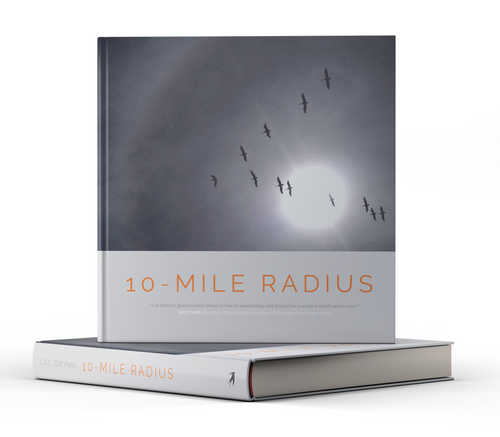 How do you find beauty and meaning in the most ordinary things when your life is being pulled away from you by the most extraordinary circumstances?

On May 4, 2013, Cat Gwynn found a sizable lump in her right breast. Ten days later the acclaimed photographer was diagnosed with Triple Negative breast cancer―a disease long feared. Her mother had succumbed to breast cancer after a five-year battle. Now it was Cat’s turn to live with it. This meant sitting with mortality, difficult side effects, and every other uncertainty being thrown her way. As the treatment protocol intensified, her immune system became more compromised, requiring limited exposure to the world around her. Cat mapped it out: her day-to-day existence was now reduced to about a ten-mile radius.

Surrendering to this confined reality, Cat decided to engage in a daily practice of seeking out images with her smartphone that would connect her to the immediacy of life. There was no filtering what she found, only a genuine curiosity to see things as they were and how she chose to frame them. Every thing, detail, and day mattered, all inspiration for mindful expression.

Cat didn’t set out to make an art project about her experience with cancer, but over time realized it was a conceptual way to show her quest for well-being and willingness to uncover aspects of the world that are normally overlooked. By being present with deep truth, she was opening herself up to her own healing and reclaiming life in the most profound way.