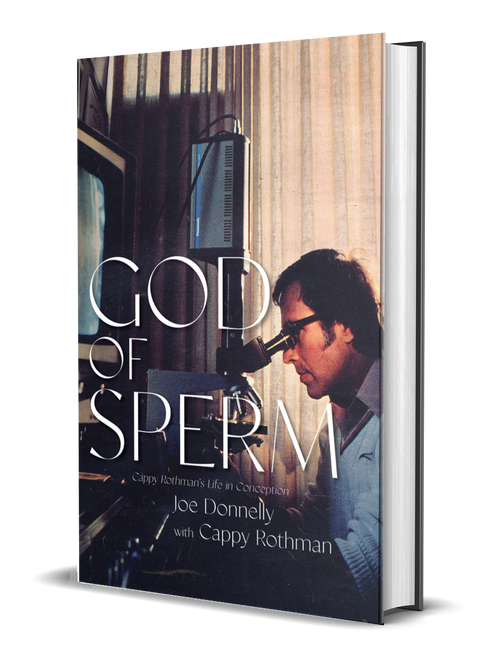 God of Sperm tells the remarkable story of Dr. Cappy Miles Rothman, the son of notorious gangster Norman "Roughhouse" Rothman,  who went on to become a trailblazer in the field of reproductive medicine.

Rothman started the California Cryobank, one of the world's largest repositories of reproductive genetic material and cord-blood stem cells. Among other achievements, Rothman also pioneered the use of microsurgery in urological procedures, postmortem sperm retrieval techniques,and was one of the first practitioners of andrology, a specialty dealing with male reproductive biology and medicine.

How Cappy Rothman went from Mafia scion and man-about-town during the postwar Miami Beach—Havana era of gangster chic to one of the most consequential figures in modern medicine is an epic, only-in-America tale that and also a fine reminder of the broad horizons and wild possibilities life in the U.S. can offer.

"It was not until I read this autobiography.... did I realize his incredible journey, which was fueled by a passion to do what all physician give oath to do--relieve suffering.  The pain, and many times depression of a barren woman, had been greatly underestimated and even neglected."
—Roger Hadley, Dean Emeritus, Loma Linda University

"From the son of a mobster to the King of Sperm, Cappy Rothman is a larger than life character who forever changed the field of infertility medicine. A quarter million people owe their children to this one man. And Joe Donnelly tells his story perfectly. A great, fun read!"
—Steven Kotler, New York Times–bestselling author of The Art of Impossible and The Rise of Superman

“Dr. Cappy Rothman’s career is without parallel in modern medicine. Do you know any physician who actually started a brand new medical specialty, has been responsible for bringing a quarter million babies into the world to parents who had been told they were infertile and was a master microsurgeon capable of procedures that solidified an international reputation as a celebrated teacher and role model? This brilliantly written and thoroughly engaging true story would be an incredible read, even if all it dealt with was Rothman’s medical career. But there’s more. Before Rothman ever thought about medical school he spend a lot of time with his dad, “Roughhouse” Rothman, a major Mafia figure who, among many other things, worked with the notorious Meyer Lansky setting up the mob’s operations in Batista’s Cuba! A wild ride of a story that you’ll have a tough time putting down!”
—Irwin Redlener, M.D., Columbia University