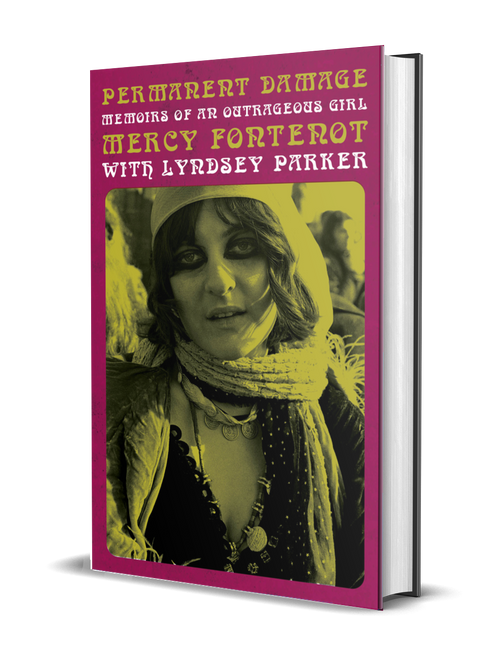 “I’m the Mae West of 1968.” Mercy Fontenot was a Zelig who grew up in the San Francisco Haight Ashbury scene, where she crossed paths with Charles Manson, went to the first Acid Test, and was friends with Jimi Hendrix (she was later in his movie Rainbow Bridge). She predicted the Altamont disaster when reading the Rolling Stones’ tarot cards at a party and left San Francisco for the climes of Los Angeles in 1967 when the Haight ‘lost its magic.’

Miss Mercy’s work in the GTOs, the Frank Zappa-produced all-female band, launched her into the pages of Rolling Stone in 1969. Her adventures saw her jumping out of a cake at Alice Cooper’s first record release party, while high on PCP, and had her travel to Memphis where she met Al Green and got a job working for the Bar-Kays. Along the way, she married and then divorced Shuggie Otis before transitioning to punk rock and working with the Rockats and Gears. This is her story as she lived and saw it.

Written just prior to her death in 2020, Permanent Damage shows us the world of the 1960s and 1970s music scene through her eyes, and the fallout of that era, experiencing homelessness before sobering up and putting her life back together. Miss Mercy’s journey is a can’t miss for anyone who was there and can’t remember, or just wishes they’d been there.