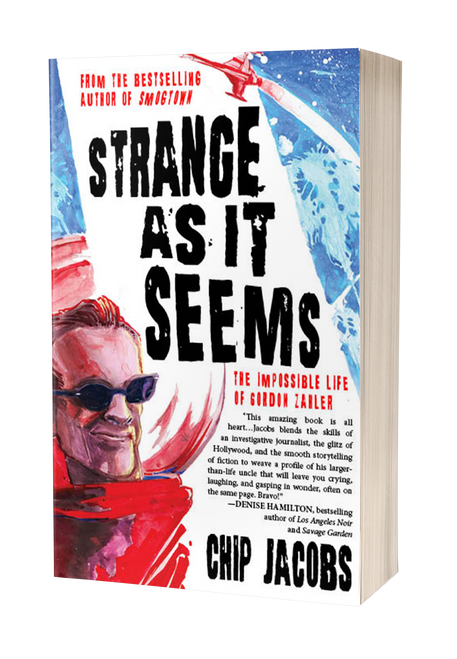 The life of Gordon Zahler was simply so miraculous that it might as well have been science fiction.  Born into an entertainment family in suburban Los Angeles in the mid-1920s, Zahler was a lovable prankster and class clown, exasperating his parents with his endless teenage feats of derring-do. But Gordon Zahler's promising career as a public miscreant went pear-shaped one day in 1940 when he and his buddies where fooling around in their high school gym with a spring board.  An unsteady jump no the board vaulted Gordon on a deadly trajectory landing him squarely on his neck, severing his spine. He was 14-years old. That's when the miracles began.

Strange As It Seems: The Impossible Life of Gordon Zahler, the journey of a former nobody who defied the odds and biases racked upagainst him to frolic in Hollywood, is vividly retold by his nephew, writer Chip Jacobs.  More than just a biography, Jacobs' portrait evokes an early, Day of the Locust Hollywood where art and fortunes were made by a colorful set of foreigners, weirdos, obsessives, and freaks. During the 1950s and 1960s, Gordon became a kingpin in this milieu, as his music/sound effects post-production house scored films for low budget sci-fi films, genre movies like Sam Fuller's Shock Corridor, Popeye and Bozo the Clown cartoons, as well as hundreds of other projects. Gordon, best known for his clever soundtrack on Ed Wood Jr.'s infamous Plan 9 From Outer Space, was always a better story than the scripts he accentuated.

Eventually wealthy, with a house off the Sunset Strip, a devoted blond trophy wife and raucous, star-filled parties, Gordon - 95-pound dynamo - built an existence from scratch that mere able-bodied mortals could only dream about. How many of them could say Lucille Ball adored them, or they were partners with Walter Lantz, Woody Woodpecker's cartoonist and producer, or Ivan Tors, the brains behind Flipper, Gentle Ben and the nature-drama field still red-hot today? Bored confining himself to one area, Gordon tried developing futuristic concepts, from audible books to talking gas-station pumps. He kept a powerboat for boozy excursions, traveled from Beirut toThailand, was thrown out of moving cars, nearly died after being blessed by the pope and had a Forest Gumpian-knack for being in dangerous places at the wrong time.

As a boy, Jacobs was not overly fond of a voluble relation with a spidery physique and witchy arms. As an adult hungry to understand his family's past, Jacobs' trepidation gave way to awe and curiosity. Strange As It Seems is the culmination of one man's quest to live a life that was almost denied him, and another's to bring that untold legend out of history's shadows.