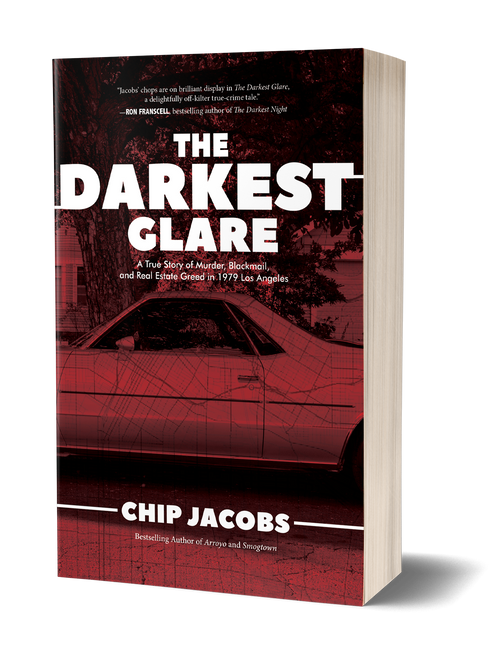 Late-seventies Los Angeles was rampant with killers and shady characters, but all the go-getters at Space Matters saw was possibility. Richard Kasparov was handsome and charismatic; his younger associate, Jerry Schneiderman, brilliant and nerdy. When the pair hired a veteran contractor to oversee construction, the space planning firm they operated out of a hip mansion in LA’s Miracle Mile district appeared poised to transform the boundless skyline into their jackpot.

After the promising team imploded, however, the orderly lines on their blueprints succumbed to treachery and secrets. To get even, one of the ex-partners launched a murder-for-profit corporation using, among other peculiar sorts, a bantam-sized epileptic with a deadeye shot and a cross-dressing sidekick. The hapless criminals required a comical number of attempts to execute their first target. Once they did, on a rainy night in the San Fernando Valley, the surviving founder of Space Matters was thrown into a pressure cooker existence out of a Coen Brothers movie. Threatened for money he didn’t have, he donned a disguise, survived a heart-pounding encounter at the La Brea Tar Pits, and relied on an ex-Israeli mercenary for protection. In the end, he had to outfox a glowering murderer, while asking if you can ever really know anyone in a town where dirty deals send men to their graves.

In The Darkest Glare, Chip Jacobs recounts a spectacular, noir-ish, true-crime saga from one of the deadliest eras in American history. You’ll never gaze out windows into the dark again.

Included as a bonus is an original true crime short from the same unhinged era. In “Paul & Chuck,” a flashy, crusading attorney wages war against the messianic leader of a bloodthirsty cult determined to teach the world to stay away.

“Jacobs’ chops are on brilliant display in The Darkest Glare, a delightfully off-kilter true-crime tale. The prose is intimate, darkly funny, and crisp. This isn’t an old song in a new key, but an entirely new song about crime, fear, and a weird kind of redemption that could only happen in the general vicinity of Hollywood.”
―Ron Franscell, bestselling author of The Darkest Night

“This is not just another Hollywood Whodunit. In the end we find it is really about one man's search and struggle to find his own personal truths and redemption. Well written and highly recommended.”
―Steve Hodel, bestselling author of Black Dahlia Avenger

“A riveting and enjoyable look at how local myths are constructed, and a vivid depiction of a time and a place that felt full of possibilities.”
―Booklist

“A completely original and genre-defying work―both historical novel and metaphysical noir. The author has caught the brass ring and given it to us as pure gold.”
―Tristine Rainer, author Apprenticed to Venus, My Years with Anaïs Nin

“[A] remarkably entertaining and informative chronicle of the birth and―so far―inexorable evolution of smog…This book is just amazing, a gripping story well told.”
―Booklist (starred review and one of the top environmental books of the year)

“Style delivers substance in true Hollywood fashion, with character-driven plots draped in glamour and sensation... the history of smog has never been so sexy.”
―Los Angeles Times

“Jacobs…is an exceptional storyteller, and his lively look at the extraordinary career of Gordon Zahler…is a peculiar page-turner.”
―Publishers Weekly

“This amazing book is all heart…Chip Jacobs blends the skills of an investigative journalist, the glitz of Hollywood, and the smooth storytelling of fiction to weave a profile of his larger-than-life uncle that will leave you crying, laughing and gasping in wonder!”
―Denise Hamilton, bestselling author of The Jasmine Trade