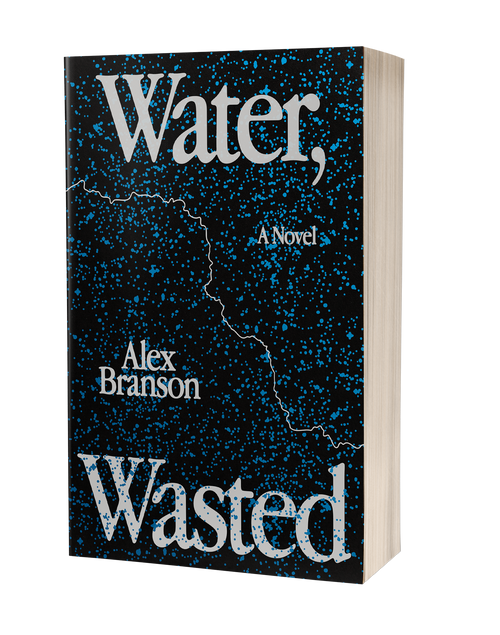 Following the shocking death of a teenage boy, Barrett and Amelia are moved to revisit the passing of their own daughter, Edi, which occurred in the same small town nearly a decade earlier. Amelia finds herself caring for the recently deceased boy’s “sort of” girlfriend, who faces constant harassment and accusations from the townsfolk, while Barrett combs through Edi’s self-published fantasy novels in an effort to connect with her. As he reads, an increasingly bizarre wave of incidents crashes down upon the town involving a talking goat, Bigfoot, and a G-Man with alien thought patterns, to name but a few. As the Missouri River slowly floods, and the thin line between fact and fiction is washed away, Barrett and Amelia struggle against the great unknown and search desperately for inner peace. Blending whimsy and wonder with a mix of mayhem and malevolence, Water, Wasted takes readers on a tour of loss, redemption, and the great unknown."

Alex Branson works for a non-profit in South Jersey. Before that, he worked at group homes in rural Missouri and Chicago for eight years. He is one of the hosts of E1 Podcast.